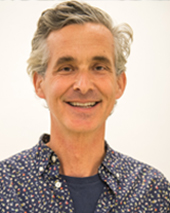 Tim Webb Is a documentary filmmaker and photographer.  His work has appeared in regional film festivals as well as gallery shows.

His current research interests focus on contemporary international cinema.  He consistently works to bring award international filmmakers to Allan Hancock College.  Most recently, he brought two award winning filmmakers to campus to present their important work.  In 2018, Director Firas Fayyad came with is film Last Men in Aleppo about the White Helmets in Aleppo, Syria.  Last Men in Aleppo won the Jury Award at Sundance and was nominated for an Academy Award for feature documentary in 2018. In 2019 Director Guillermo Garcia Lopez presented his feature film, Delicate Balance based on an interview of José Alberto Mujica (President of Uruguay from 2010 to 2015).  Delicate Balance won the Goya award for documentary in 2017.

His most recent film work has taken him to Botswana where he and his collaborator Michele Simonsen made short films about the work of two nonprofit organizations: Bana Ba Letsatsi and Travel For Impact.

He is currently working on a documentary looking at youth climate activism.